Besides seeing new things while driving along the route between Illinois and Montana I elected three or four locations that I would like to visit and learn more about, two of them were on today’s schedule.

The day ended yesterday with storms and showers and open up exactly the same today, not good, but my optimism told me that when arriving at Rapid City, 150 miles later, things should be better…but they were not, The rain was so hard that I decided to stop where all signs were pointing since I was driving even in Wisconsin.

Welcome to Wall Drug. The small town drugstore made its first step towards fame when it was purchased by Ted Hustead in 1931. Hustead was a Nebraska native and pharmacist who was looking for a small town with a Catholic church in which to establish his business. 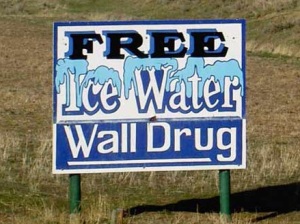 He bought Wall Drug, located in a 231-person town in what he referred to as “the middle of nowhere,” and strove to make a living. Business was very slow until his wife, Dorothy, got the idea to advertise free ice water to parched travelers heading to the newly opened Mount Rushmore monument 60 miles (97 km) to the west.

Today it takes in more than $10 million a year and draws some two million annual visitors to a remote town in the middle of nowhere.

My first stop, even knowing that would be one of the most touristic locations in U.S., seemed from the moment I enter the territory something worth it to know more about, in the information center I got an audio guide a poncho for the rain, that just started falling harder and a good doses of positiveness…but unfortunately it was not enough, the moment I reached the big balcony on top of the wide open amphitheater my view was to say the least disappointing 😦 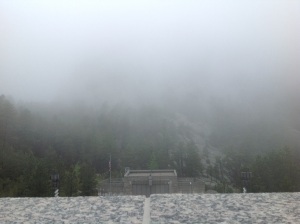 There was nothing I could do about it unless deal with my frustration, so I went walking around the monument and peacefully listen to my audio guide while learning and visiting all the sites available.

On the way back to the cafeteria to try a buffalo burger and recharge my (extremely) low levels or root beer I sat by the window reflecting and thinking about this tremendous upset, about the men behind this incredible monument and life in general.

The idea to carve on a mountain side the face of four of the most prominent presidents of the country might seem today as a normal action and since it exists for more than 70 years….something obviously doable.

The little information I had the chance to read and learn while looking in despair at a white wall of intense and thick fog was somehow revealing of the hardships that Gutzon Borglum had to go trough to finish the work, which he didn’t since he died few years before.

Above all it was a complicated process to choose the location, choose the people to be portrayed, how many republicans versus how many democrats, the funding of the project, the irascible personality of the artist (he would fire workers on a constant basis and is son Lincoln Borglum would hire them the next day)…in a nutshell a beautiful result for a nightmare.

What is also very interesting about Mount Rushmore, is the fact that the main reason behind the creation of the site was to attract tourists to South Dakota State…even knowing that the black hills were a sacred ground for the native Americans and the area was protected by an agreement that later the congress manage to change and allowed the works to beggin.

Still, the dream of a man was so strong that after few years (the project was concluded in less than 20 years) it became a reality and today stands as one of the postcards of the American nation.

The key question for me was…What are our dreams made of?

While I was about to finish my buffalo burger, “someone” up there decided to give me a little present just before my departure and for few seconds the masterpiece was revealed to me. 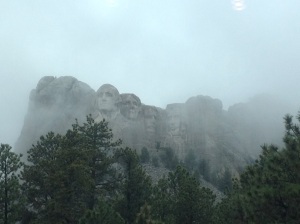 Next, even knowing that the weather was playing against me, I decided to risk and try out my second objective of the day and visit few miles away the mysterious site of Crazy Horse memorial.

At the entrance of the territory the volunteers at the gate warned me that the fog was so thick that would not be possible to see the sculpture mountain but they would charged me only half of the ticket if I would like to go in and visit the information and cultural center and comeback the next day for free. Since I was not returning the next day I decided to go in and learn the best I could out of a foggy experience.

Crazy horse memorial is something worth to visit on and on, mainly because it reminds me of the works of Gaudí at the Sagrada Familia in Barcelona….actually there are many more similarities between this wonder and others with a similar impact in our life’s.

The Crazy Horse Memorial is a mountain monument under construction on privately held land in the Black Hills, in South Dakota. It depicts Crazy Horse, an Oglala Lakota warrior, riding a horse and pointing into the distance. The memorial was commissioned by Henry Standing Bear, a Lakota elder, to be sculpted by Korczak Ziolkowski. It is operated by the Crazy Horse Memorial Foundation, a private non-profit organization. 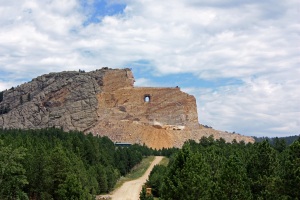 The monument has been in progress since 1948 and is far from completion, When completed, it may become the world’s largest sculpture ever known.

There are many differences between both monuments and some are self explanatory with the highest level of irony…starting with the fact that I was there and could not see the mountain just imagine it in my dreams…probably the same way Korczak, the visionary behind the dream saw it 67 years ago.

The overall project of the memorial once is totally concluded will be more of an indian “city” with an university (just started a program) sports facilities, a place to gather all North American Indian tribes and a way to honor and preserve the culture and the wisdom time and man were not able to erase.

Crazy horse memorial is being fully developed with no public money, after Korczak passed away in mid eighties his wife took over the responsibility to lead the project and after their 10 children did the same with a total commitment with the final outcome…which we don’t know exactly when will be available….maybe more 100 years some people say.

It is amazing that on the way out of the cultural center there is a sign on the door written – Never forget your Dreams – which is probably the only way after some many years the dream of crazy horse is still alive and progressing dynamically.

The other thing that capture my attention was the peace and harmony one can breath inside this place, Indians and white man working together side by side, a family commitment, volunteers that came every year to help and a dream in motion.

So I wonder again…What are our dreams made of?

2 thoughts on “Never forget your dreams”

Thoughts from the Future